Each day a step in Japanese.

Learn a bit of Japanese everyday!

I felt like giving her a mint green shirt... Then laziness turned to a monochromatic scheme turned to looking up the correct stroke order for the kanji 緑 (みどり）. 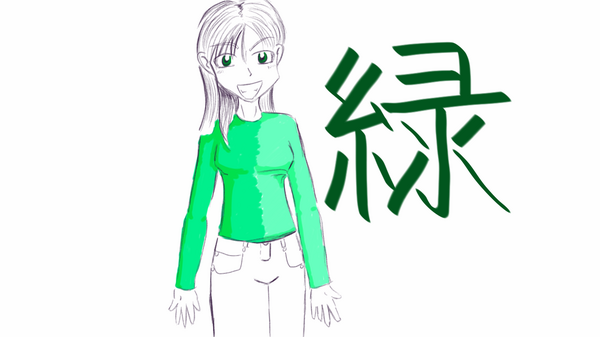 I've been doing WaniKani for close to a month now, and I've Mastered the recognition of 26 radicals.

I'm pleased to say that I can recognize the following kanji/verbs/words, too:

And that's just the tip of the iceberg... I'm better at recalling them upon visually seeing them rather than remembering them like that... so that was a bit of a test for me. ^_^; But, so as to not make this post so long... I'll stop here! Now to learn some verb conjugations... time to get back into my textbooks!

This is a fairly well known one: すみません (sumimasen).

It can be used to get someone's attention, for example at a restaurant you can get a server's attention by raising your hand and saying 「すみません。」

Or if you want to stop someone in the street to ask them something, so on so forth.

You can also use it to apologise, but apologies can wait for another post.

The word for "this" is これ (kore). It is used to indicate something close to the speaker.

Those are some examples of これ, それ, and あれ, but you probably wouldn't hear a conversation exactly like this. For example, the second line might just be 「鯨じゃない」 and the final line might use the が particle instead of the は particle. However, I'm not really sure, I'll leave all that for another day.

Anyway, the three words covered here are probably what you would use when pointing to things. If you want to talk about "this dog" or "that cat" or something more specific however, you would use この (kono), その (sono), and あの (ano).

「あの鳥は緑です」 (ano tori wa midori desu) - "That bird over there is green."

First let's start with some pronouns.

The word for "you" is 貴方 (あなた - anata). Note that you wouldn't use this for someone of higher status than yourself.

The particle の (no) indicates possession. You can think of it as a backwards "of" or alternatively, as the apostrophe-s for possession in English. You place this particle after the possessor to show that something belongs to them.

Another example is:「終わりのセラフ」 (owari no serafu - Seraph of the End), which is the name of the anime I was just watching. Here the の isn't really being used in a possessive-pronoun kind of way, but more like a backwards "of".

So somebody asks you:

Note that you don't say お名前 when referring to your own name, just 名前.

Of course, if you're being super informal and someone asks your name, you can always just say 「サムです」instead. If your name is in fact Sam.

Japanese often doesn't translate directly to English, and so it's impossible to do this list one phrase at a time without covering some other stuff like particles. For example, the phrase "What is your name?" can't be translated word for word. To say this phrase rather informally would be:

To break that down a little, the word 名前 (なまえ - namae) means name.

The prefix お (o) is used to be respectful to a person or object. Some examples: お母さん (おかあさん - okaasan) meaning mother; お弁当 (おべんとお - obentou), bento, a boxed lunch; and お茶 (おちゃ - ocha) meaning tea. Because it's a sign of respect, it would be a little wanky to use it for yourself, so when talking about your own name, you'd use 名前 and not お名前.

Last and most difficult to properly explain is は, which is the topic particle. Though it is written は which would usually be pronounced "ha", it's special and you say it "wa". Now whatever this particle is placed on the end of is the topic of the sentence. This is not necessarily the subject of the sentence, although it often can be. I don't know how to explain exactly what the topic is, but the way I learned to use the は particle is to treat is as meaning "as for X ...".

So 「お名前は？」 means "As for name?", which is an informal way of asking for someone's name.

So what if you want to be a little more polite? Well then you might say:

So we've added three new parts. The です is the state-of-being covered in my last post. Loosely translated as "is".

The word before that, 何 (なん・なに) can be read either as "nan" or "nani" and I am really not qualified to say when you use which, so stick to trusted examples. Regardless, it means "what".

Finally we have か (ka) which is the question particle. It is placed at the end of a statement to turn it into a question.

So 「お名前は何ですか？」 means "As for name, what is it?". This is a more polite way to ask someone's name.

You might notice that none of there phrases directly refer to "you", despite them asking for "your" name. It's not always necessary in Japanese to supply pronouns in this case as the context usually makes clear what you're asking for. Personal pronouns do exist though and I'll get to them later.

Next time, I'll write about how to answer this question and give your name.

One last note on the use of です versus だ. All politeness aside, I'm led to believe you can only use だ at the end of a sentence. So in order to say "it is a cat", it is correct to say either:

It would be wrong to say "da ka", as だ should always come at the end.

I'm sure there's more nuance to that that I'm not aware of, but this is something I have read.

I found a Tumblr post recently about how roughly 300 words in any language is enough to talk about everyday things. There's a list of the 269 words/concepts here: http://funwithlanguages.tumblr.com/post/105572981908. My plan is to post every day finding and explaining a translation for one item of that list.

I don't know a lot of Japanese - I can read and write the kana, but little more than that. So if I get anything wrong, please correct me.

I also don't know how well the items in that list work in Japanese, but I'll do my best.

This is called the copula and it is not an actual verb in Japanese. There are two forms: です (desu) and だ (da), the polite and plain forms respectively. So to indicate that something is, you append one of those on the end. So to say "it is a dog" you would say:

The negative forms of だ and です are じゃない (janai) and じゃないです (janai desu). So to say "it is not a dog":

Those are the non-past (present and future) forms of the copula. The past forms - "it was a dog" - are as follows:

So in conclusion, and for reference:

The phrase that means "every day" is 「まいにち」(mai-nichi). It is used at the beginning of a sentence, for example:

Started with continuous tense in chapter 7.

Wrapped up chapter 6 of the work book.

Its getting increasingly difficult, yet I definitely understand more and more of japanese.

ラーメン - the most important signs to look for in Japan

Tried playing through this Japanese game called Sakura Note. Couldn't really read everything, but got a vague sense of what was going on for the first 5 minutes.

Try the Japanese article for fun!


After coming across 応援「おうえん」in my Wanikani lessons, I decided to look off into this word since it reminded me of the title of this rhythm Elite-Beat-style game --> 押忍！闘え！応援団 「おす！たたかえ！おうえんだん」

An ōendan (応援団?), literally "cheering squad" or "cheering section",[1] is a Japanese sports rallying team similar in purpose to a cheerleading squad in the United States,[2] but relies more on making a lot of noise with taiko drums, blowing horns and other items, waving flags and banners, and yelling through plastic megaphones[3][4] in support of their sports team than on acrobatic moves (though some ōendan incorporate pom-pom girls). In addition to cheering for their own teams, ōendan have been known to lead fans in cheers which tease and taunt the other team and its fans.[4] This is usually done in the spirit of good competition, but occasional fights have broken out if the taunting gets too heated. Smaller ōendan are sometimes calledōenbu (応援部?) (or "cheering clubs").

Meaning "reccommendation" and with する, "to reccommend." Learned this gem of a word from Japanese friend.

The Taiwanese-Japanese businessman was known for being the creator of the ramen instant noodles as we know it nowadays .

Google made a beautiful Doodle as a homage, and it has more info about how amazing and inspiring he was (and still is).

You can check it out in here.

"Peace will come to the world when all its people have enough to eat."

Also called Doll's Day or Girls' Day, Hinamatsuri is celebrated on March 3. Platforms covered with a red carpet display a set of ornamental dolls representing the Emperor, Empress, attendants and musicians in traditional court dress of the Heian period (last division of classical Japanese history, from 794 to 1159).

Hinamatsuri traces its origins to an ancient custom called hina-nagashi ("doll floating"), in which paper dolls are set afloat on a boat and sent down a river to the sea, supposedly taking troubles and bad spirits away with them.

Families generally start to display the dolls in February and take them down immediately after the festival. Superstition says that leaving the dolls past March 4 will result in a late marriage for their daughters.

Kintsukuroi is the art of repairing pottery with gold (or silver) lacquer, and about the understanding that the piece is more beautiful for having been broken. It literally means "to repair with gold".

"If you try, you may succeed.
If you don't try, you will not succeed. This is true for of all things.
Not succeeding is the result of not trying."

Although he is well known for applying a lot of financial reforms and politicies that saved the Yonezawa province from hunger and poverty, this poem is the teaching that stuck with the Japanese people as an example of self-discipline.

Cute and really clever pictograms of some kanji I found on the internet today.

These belong to the Japanese graphic designer Masaki Hiromura.

Otsukaresama desu is a really common expression in Japan. Even though it sounds weird in English, it literally translates as “honorable tired person".

It is often used to thank people for their efforts, actually meaning something like “thanks for working hard". It is commonly used after work for co-workers and in sports towards teammates after an event or practice.