For the Global Game Jam 2015 my team made a 4-player game using xbox 360 controllers. Since this setup it not ideal for people to actually play the game I decided to set up some Twitch chat controls for it instead. I found and made use of OpenTwitchPlays and HexChat to accomplish this. Even though Twitch has approximately an 18 second delay (or longer) it still was good to get something working through the IRC chat. I'm interested in this kind of game that makes use of crowds of people for input (like Choice Chamber), so I might be researching this in the future.

Martian Mascot Four Man Button Jam on Twitch
I'll include a screenshot of some friends who logged on to try it out.

I scripted some minor input commands to hook up to OpenTwitchPlays and also made the UI scalable, which I hadn't had time for during the actual weekend jam period.

Here's the game on the Global Game Jam site if you wanted to take a look at it:
Martian Mascot Four Man Button Jam on GGJ

We're still finding areas to polish up, so hopefully I'll have more on this project to add to the streak! 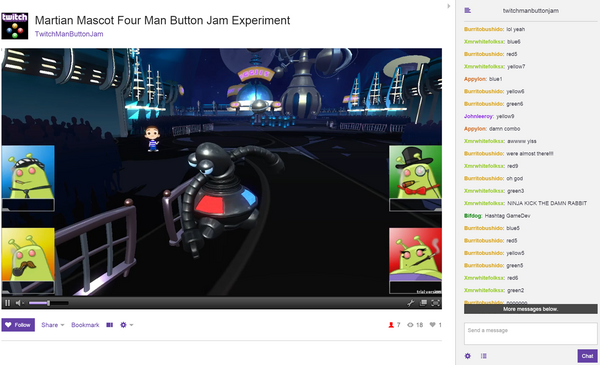 So uh, didn't feel like working on the game today, which kinda violates what I say the streak is, but really its just meant to keep you developing anything, your current game, games, not games, just working.

I wasn't gonna do anything but then [someone else, not the post below] got me thinking of how to make a dirt simple dialog tree system, so I figured out a json structure that can be parsed into a typedef and thats basically all you need, apart from a little input handling, to handle full trees of conversation. If I play with it more I'll add ID's so you can jump around if needed, currently once a branch is over there's no going back, its only storing the current node and they don't maintain parents lol.

Nothing much to post today. I had a think last night about how the dialog system should work, and I have a pretty good idea of how I want talking to happen. Today, i made a stab at the Conversation class that is going to be the basic foundation for the dialog game mechanic, but I haven't actually hooked it up to anything that can run yet.

To simplify the scripting, most of the commands a conversation uses will have some automatic ai behaviors. For instance, npcs will usually turn to face the last person who said something, unless they are speaking someone's name (in which case they will face that person). Also, when the conversation begins, all the speaking characters will enter the conversation region - and they will disperse when it is over. I should be able to just write something similar to a movie script, with very little direction, and have the basics function. If needed, I will be able to have more control - but I'd like it to seem like the characters are speaking of their own will.

If he is around to hear it in time of course :)

Added signals to the map editor

Today I worked on adding signals between the various models for the world map. This ensures the models only know about their child and not their parent.

In Elm signals are kinda equivalent to events, but described as "a value that changes over time". I don't quite fully grok them at the moment, so I suggest reading the info here if you're interested - http://elm-lang.org/learn/What-is-FRP.elm

No exciting screenshot for this though today.

This enemy chases after the player, occasionally pausing and rushing, just like in the original One Room Dungeon.

It's easy to deal with when it is alone, but in large groups, Ghosts can become a serious threat.

Today I created the movement code and implemented the art I drew a couple days ago. There is no collision detection or defeat state for Ghosts and the player, as you can see in the attached GIF. Maybe tomorrow.

Initialy I didn't plan to make a 3D game, but here I am, developing a 3D voxel based game (not a Minecraft clone though). Currently I plan to make it a fully customizable dungeon crawler. I already implemented generating a 3D level from a single png file. Collision works more or less, but there might be some bugs. I already started working on an enemy, but it doesn't work properly yet (AI/rendering doesn't work properly, not sure which one). Including a pic of latest version - 0.3. I'll upload the game once it's a game, not just a voxel engine.

This is also my first ever 3D game and I'm still learning lwjgl. Graphics made in paint.NET.