A submission for Doodles 'n Stuff 29

While I was out on a walk I was listening to music, and the this theme came on. And I kinda felt like drawing something about it.

I don't know if I'll ever finish it. 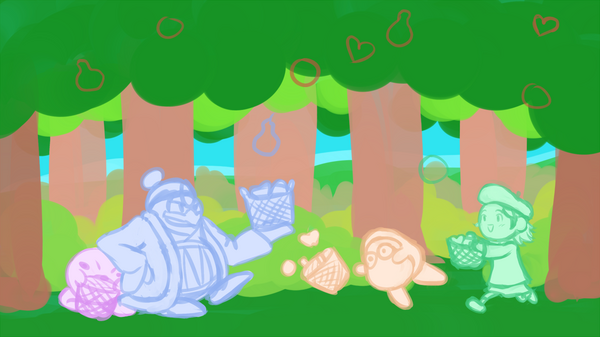 A submission for Doodles 'n Stuff 25

I haven't worked on it very much since the last update. But I'm doing something at least.

A submission for Doodles 'n Stuff 24

So I've worked on Luck's face, which is not enough. I actually need to draw him an outfit and stuff, but I find him hard to work with for some reason?

Anyway, he's yet another headshot of Luck.

A submission for Doodles 'n Stuff 23

I've modified Argo and George a little, so I'm re-adding them in!

From top to bottom!

A submission for Doodles 'n Stuff 22

I've worked on some of the many forms I want to make for Shadow Valter! So far I have the regular shadow, wolf-like form, and a demon bear kind of thing!

Other than that, I finished watching G Gundam today. There's another anime that made me cry!

I'm planning on drawing portraits of all the members of the Shuffle Alliance!

For now I only have Argo Gulskii from Neo Russian, and George de Sand from Neo France.

I'm going to work on Chibodee next! The next one will be Sai Saici, and then their leader! Domon Kasshu!

A submission for Doodles 'n Stuff 21

I wanted to upload it before midnight, but unforeseen events kept me from doing so, and made it 15 minutes late instead.

And for the second drawing, I've finally put myself to work on the main antagonist of Timeline (temp)!

His name is Valter Austro, an ancient sorcerer who was revered by many for his power over dark magic, the forbidden arts. He had many followers in the past, but after his crushing defeat many of his people left him with their faith. Some stayed and have been trying to revive their master for eons.

Their effort paid off, as Valter's soul came back from the dead. For a long time his lost grudging soul has been wandering the world of the living, witnessing historical changes, and not being able to do anything but feed his anger. During his time as a wandering soul he avoided Harvesters for as long as he could, until one day they caught him.

The Harvesters brought him to the Underlands' soul queue. He had to wait his turn to be reborn as a Shadow and forget his past to start a new "life". As he went through the process of turning into a Shadow, he was pulled away by a powerful force. This sent him back to life.

Despite being sent back to the world of the living, he has yet to be reunited with his body. He is but a Shadow. Fortunately for him, he had been summoned before his memory was erased. Now a Shadow with the full memories of his past, he is to return to his body as soon as possible.

Soon, the Underlands will send forces to bring him back, and Esthel's adventures will begin!

A submission for Doodles 'n Stuff 17

A submission for Doodles 'n Stuff 15

I need to work on more art. And since I'm not ready to record my Let's Plays yet, I'm drawing as many thumbnail art as possible.

A submission for Doodles 'n Stuff 14

I broke my streak again! So I've re-drawn the whole sketch I did last time. I wasn't that proud of it anyway, this one is much better.

I love seeing Kisara and Ukita teaming up like that. Also added a much needed cat!

For once, I'm actually proud of this one. It feels like there's a little more action going on.

Kisara and Ukita WIP (base sketch)

A submission for Doodles 'n Stuff 10

I broke my previous streak. But now I'll just try to start a new one!

I'll be working on a drawing I've been wanting to work on ever since I finished reading Kenichi. I've really been wanting to draw two of my favorite characters, so here's a preview.

For now this is just the base sketch, I'll continue tomorrow. Maybe later tonight.

A submission for Doodles 'n Stuff 4

I was running out of time for today's sketch D:

A submission for Doodles 'n Stuff 3

A continuation of those shark themed characters I've posted the other day!

I went with the last design I did and modified it to fit my needs. He's a kickboxer and he will enter the tournament for glory! He's serious about winning, so he will not be an easy foe!

I'll give him shark themed moves too! (I'll look at kickboxing moves and stuff for inspiration).

A submission for Doodles 'n Stuff 2

I've been watching Mobile Fighter G Gundam for a few days now. And this has been wandering in my mind, had to draw it.

A submission for Doodles 'n Stuff 1

I wanted to create a new character for my "Tournament Story".

I was thinking of having a character that can transform his body parts into animal parts, kind of like Kars in JoJo's Bizarre Adventure. But then I just decided I'd go with a shark guy. (mainly because I've been watching My Bride is a Mermaid on Netflix, and I love the shark guy in it).

In all these, I'd say my favorites are the Shark Punch guy, and the Business Shark.

Sure it's not much, but I've done pretty well with these I think.

Draw anything once a day.